A Summer Focused on Pedestrian Safety

Currently, Memphis is ranked the third deadliest city in the country for pedestrians. In 2020 alone, 66 pedestrians were struck and killed by vehicles – the highest number in at least five years. Shelby County leads the state with more traffic deaths than any other county in Tennessee. Despite the tendency to attribute traffic deaths to individual responsibility, these accidents are not random.

The burden is disproportionately felt by older adults and communities of color with lower incomes. Typically, traffic fatalities happen at night in poorly lit areas, on wide streets and in high-poverty neighborhoods.

At BLDG Memphis, we believe every Memphian deserves to live in a community that is safe, affordable and healthy. To highlight this growing trend, we have launched a series of events focused on traffic safety from June 2021 through September 2021. To kick off the summer series, Ian Thomas, local and state program director at America Walks, joined us at our virtual June Member Meeting to share his vision for creating more walkable and safe communities across the country.

In his presentation, Ian touched on the relationship between speed and fatalities, noting that “The higher the speed that a person goes, the greater the chance of a fatal vehicle collision. We need vehicles to slow down for the safety of everyone – including the people in the vehicles.” Vehicles traveling up to 40 mph have an 85 percent chance of striking and killing a pedestrian. Roads such as Poplar Avenue, Jackson Avenue, Austin Peay Highway, Lamar Avenue and Shelby Drive see a significant volume of pedestrian crashes each year.

Nonetheless, Memphis is not alone in its culture of speed and traffic violence. There is a growing trend of pedestrian fatalities across metro areas in the U.S. Rayla Bellis from Smart Growth America joined the July Member Meeting on Tuesday, July 13, to discuss her report titled Dangerous by Design and share thought-provoking statistics about pedestrian deaths, roadway design and local policies that can create change. She explained that “truly designing for safety means giving drivers numerous visual cues to slow down.” Narrowing streets, increasing signalized crosswalks, creating speed bumps and roundabouts, and implementing traffic-calming measures allow drivers to slow their speed and reduce the risk of causing harm to both themselves and others. 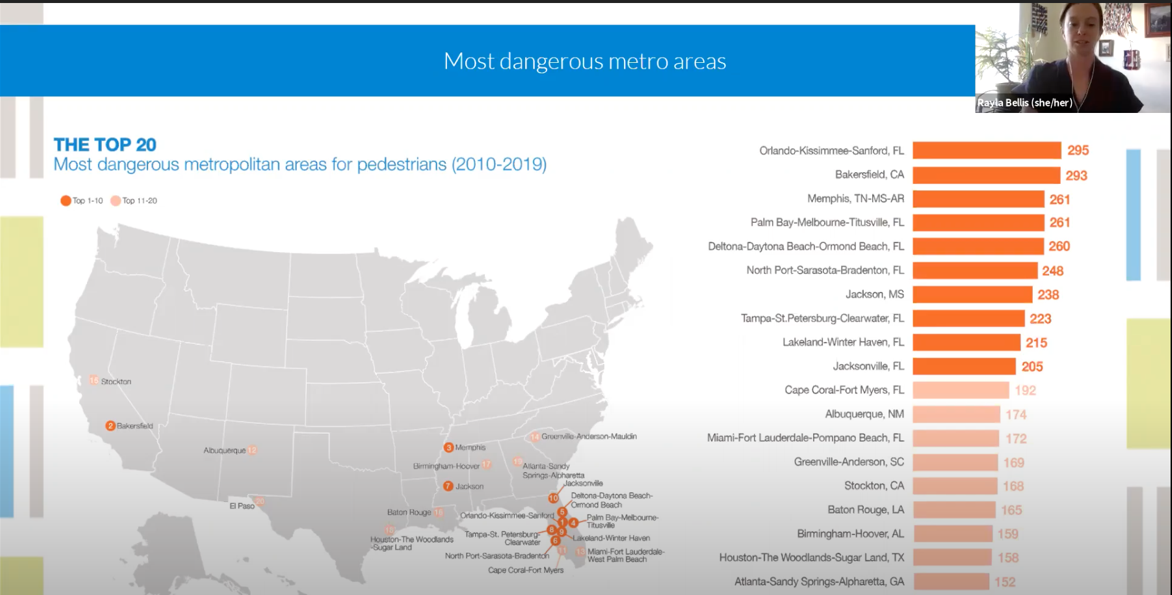 Everyone has the right to move about safely in their community. Together, we need to develop policies and infrastructure that slow down vehicles, invest in diverse transportation options and prioritize the health and safety of historically minoritized neighborhoods.

America Walks is a national non-profit advocacy organization whose mission is to get more people walking and push policy changes that will make American cities a safe place to walk.